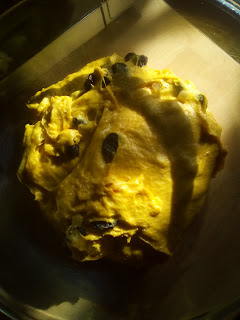 It's Celtic Nations Day on 5th March, and for those of us in the Cornish Diaspora, it's also St Piran's Day. For us at home here, it's also our third consecutive one cocooning (we've been cocooning 2 years and a day today). Last year we went digital. This year we had hoped to maybe get together in a safe way with some friends, but it was not to be, so it's just us.

We've had most of the afternoon in the garden. Our rescue hens now have their sandpit spruced up and topped up, as well as their swing re-strung ready for the summer, and one of our two potato planters is ready for us to plant up (we'll do that on St Patrick's Day as per).

This morning, however, was all about the cooking preps.

My flaky pastry is chilling in the fridge, and my saffron buns have been proving most of the day.

Unfortunately I didn't have quite enough of my own saffron this time around, but I'm hoping that, if they do as well this winter as they did last winter, I'll be able to do them with all home grown saffron next year.

Our family Saffron Buns recipe has two modern branches. One here, and one in the States (carefully collected into the family's mixed Cornish and American Cookbook as collected by cousin Dorothy B). I love looking at the two alongside each other because you can really see which bits stayed the same and which evolved slightly and that kind of lends the voices of our ancestors and makes it feel even more like they're right there, despite having been cooking sometimes hundreds of years ago and opposite sides of the Atlantic.

To my knowledge, we don't have any in-family variants for vegan/coeliacs, but it's such a forgiving recipe (yours truly may have been known to use a little extra butter and make up the liquid in water when the milk went off once), I can't imagine it would be hard to adapt.
If you give it a go, shout me (dglaity1 on Instagram) and let me know

On the off-chance you're peckish and want to try your own, here's the Cornish, 'stayed at home' and the American variant recipes:

* 1/2pt (300ml) Milk (Whole Milk)
* About 2tsp (.5g or thereabouts) Saffron strands
* 2oz (50g) butter
* 3¼oz (90g) clotted cream (I can do you a nice line in a clotted cream recipe if you're stuck for one)
* 1lb 4oz (550g) Flour (Bread Flour. We use mainly white if we have it, but wholemeal doesn't hurt it)
* 1 heaped tsp salt
* 2oz/50g sugar (I like brown sugar, but whatever you have to hand is fine)
* 2tsp (or 1 sachet) quick-yeast.
* 3oz (75g) raisins/currants/similar
* 1oz (25g) mixed peel
- I tend to just knock the oven on slightly if it's a really cool day as you'll need a really warm place for it to rise, so a low-lit oven from starting out until you set it to prove usually does the trick.
- Warm your milk through until hot, but not boiling. Stir in the saffron, butter, and cream. Set this aside for 15-20mins until it's hand-hot and properly yellow (should be proper sunshine in a jug)
- Put the dry ingredients (not the fruit) in a bowl.
TIP: I tend to put the salt in first and the yeast in last. That way the one can't affect the other.
Make a well in the middle and gradually mix the now hand-hot milk mixture into the dry ingredients.
- When it comes together, knead it in the bowl for about 10 mins, adding in the fruit about half way through so that it incorporates.
- Set to rise in a warm place for about an hour (until it doubles).
- Knock back the dough on a floured surface per bread.
- Divide into 8-10 (if you've several children to feed, I sometimes go to 12) pieces and roll into balls.
- Leave to rise again on a baking tray for about half an hour.
- Preheat the oven (I heat it all the way then drop it down) to about 200C (at a guess, high-moderate for gas, but I'm not that experienced with gas).
- Bake for around 20mins until they're golden.
- Make the syrup while the buns bake. For the syrup, I use about 20z (50g) sugar to 3-4 tbsp water. Dissolve the sugar completely, then bring it to a boil for about a minute until it goes glossy
- Set the buns to cool and brush immediately with the syrup.
Serve: Either fresh and still warm (as is, or with clotted cream or butter as desired), or let them go cold and toast and butter them later.
~
1tsp saffron soaked overnight in 1/2 cup warm water
2 cups lukewarm water
1 yeast cake
1/2 cup sugar
1/2 cup lard or shortening
smidgen salt
1 cup raisins or currants
1/2 cup candied fruit (or more, as desired)
Flour (enough to make a soft dough)
In a bowl, mix together the lukewarm water and yeast. Add sugar, lard, salt, raisins, and candied fruit. Mix well, and then add enough flour to make a soft dough. Let rise until doubled in size. Knead down and fashion buns and place them into a 9 inch square baking dish or pan. Let rise. Bake at 325 degrees until done.
~
ANCESTORS
Our Celtic Family Lines we're remembering today for Celtic Nations Day (if any surnames match, do get in touch. I'm always up for comparing notes and DNA!):
CORNWALL (mostly South-Siders)